When Joncy decided in his head that he wanted to do this film, that was 3rd week of December.  He wanted to shoot the film in March. I said earliest would be middle of May. Ok, he said, May 15.  Then he set that on stone and we moved forward. Mind you, we didn’t have a script yet in December. I arrived in Bacolod December 25, Christmas day.  I spoke to our writer December 26.  We had our first meeting about the script and our writer had a hangover.  Why not, we were in Bacolod in the middle of the holidays. Ha, what did I expect asking for a 9am meeting?!

Five months later and we were shooting Flotsam, exactly May 17th.  It was a 12-day straight shoot and initially, I asked for breaks in between every 3 days because by my experience, people start getting antsy from cabin fever but our producer Darlene said we couldn’t afford it and so I agreed, crossed my fingers and said, okay, lets try this without loosing our minds.  Interestingly, it was the opposite, and saying that the shoot was fun is such an understatement. Sometimes it felt like we weren’t even shooting.

Every day, every night, people jammed. Music was constantly playing except near the set and on takes.  And it was built in because we had over 8 songs performed within the film, so actors and actresses needed to rehearse the songs with the songwriters Mia, Kiddo and Bo Bismark, it was such a sweet sight to behold, and everyone was in light spirits because of the music within the set. It really was and is the heart of the movie Flotsam.

Mind you, the songs were not only going to be sung live, they were going to be recorded… live.

Here is one of those jam sessions slash rehearsals Joncy shot of Solenn singing Seagulls (Kai’s song). She sings it live in the movie.

And live din’t mean only the voices were going to be recorded live, even the instruments, so we could only have one good take because it would be very difficult to mix different takes as they were played live and in the true jamming fashion.  And if my memory serves me right, they actors/actresses rehearsed so well that they nailed it at first take. I remember Solenn had 3 takes but only because we wanted a different rendition for the recording and the one to be used for the film.  Carla did 2 takes, one for the film and one for the soundtrack.  Because Julia was only recording for the film, she did it in one take. Mark Abaya’s solo was also done on one take. Franco Daza’s solo was done a couple of times but it was a technical problem, he was moving and the camera focusing was tricky so we did a few takes. But he was great.

We had a dry set meaning I mandated a “no alcohol” on the set rule. It seems like a simple rule every film person understands but not when you’re in an artistic hostel by the beach shooting a film in a surf town. Was I asking too much? It was I think the only way we would get it done. And later on, Mia, Kiddo and other people would commend me for being unwavering on this rule because it could have gone out of control, people were having so much fun, a drop of alcohol would have been deadly for us.  So all these jamming at night would extend till early morning for some, were all done without alcohol, there was this natural high at Flotsam. 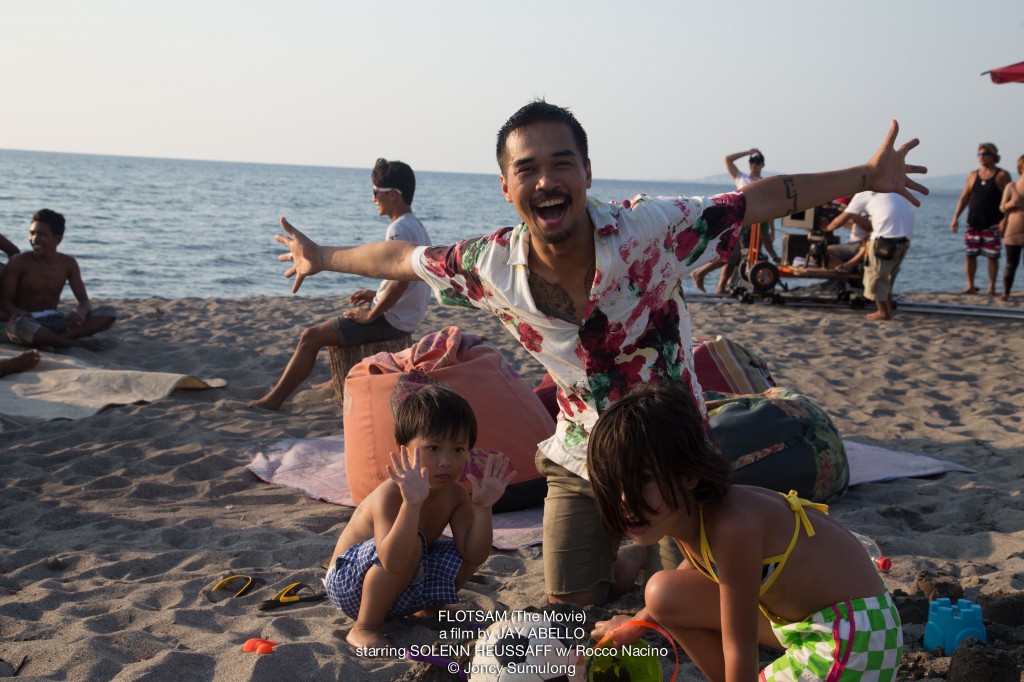 Just to give you an idea of what jamming is in Flotsam, here’s the best version of Eraserhead’s Elesi you will find out there, bar none, I kid you not.

Ok, there was this one exception. Solenn asked if we could have a small celebration for her last shooting day, I think this was day 10th and I knew that we would end around 9-ish so I agreed.  Solenn made camembert and some guest brought food and for this one night exemption for everyone, we did Jeff Ortega’s genius 5-minute drink and had a small, short but crazy and intense party.

The whole celebration only lasted for 3 hours. I gave a curfew and limit. By midnight, there was to be no more drinking and we pack up the party, that was the deal and everyone agreed. 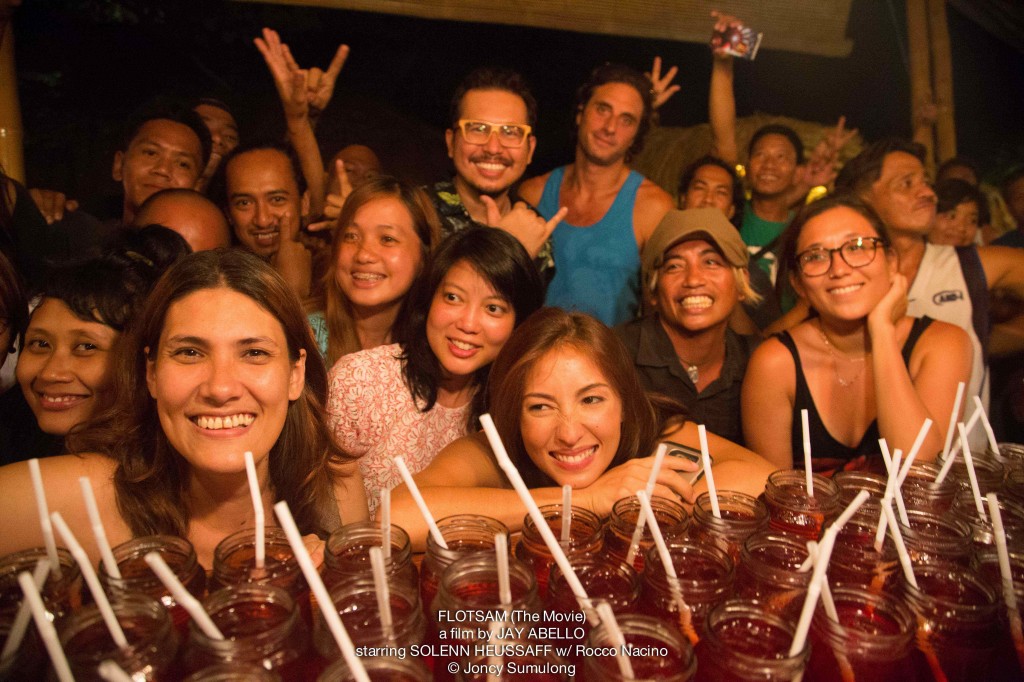 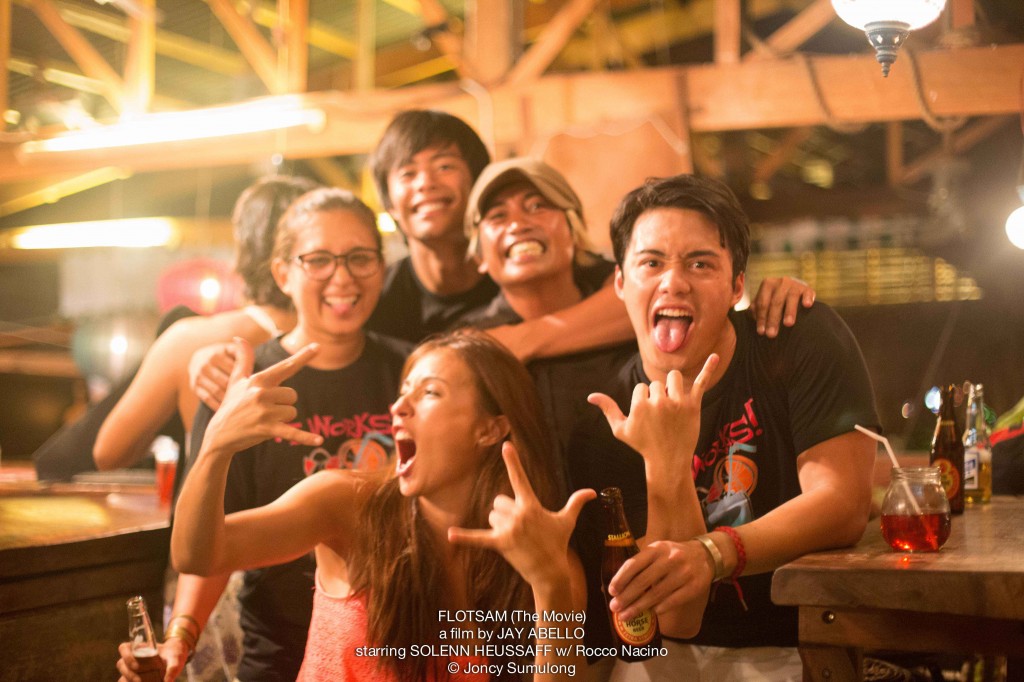 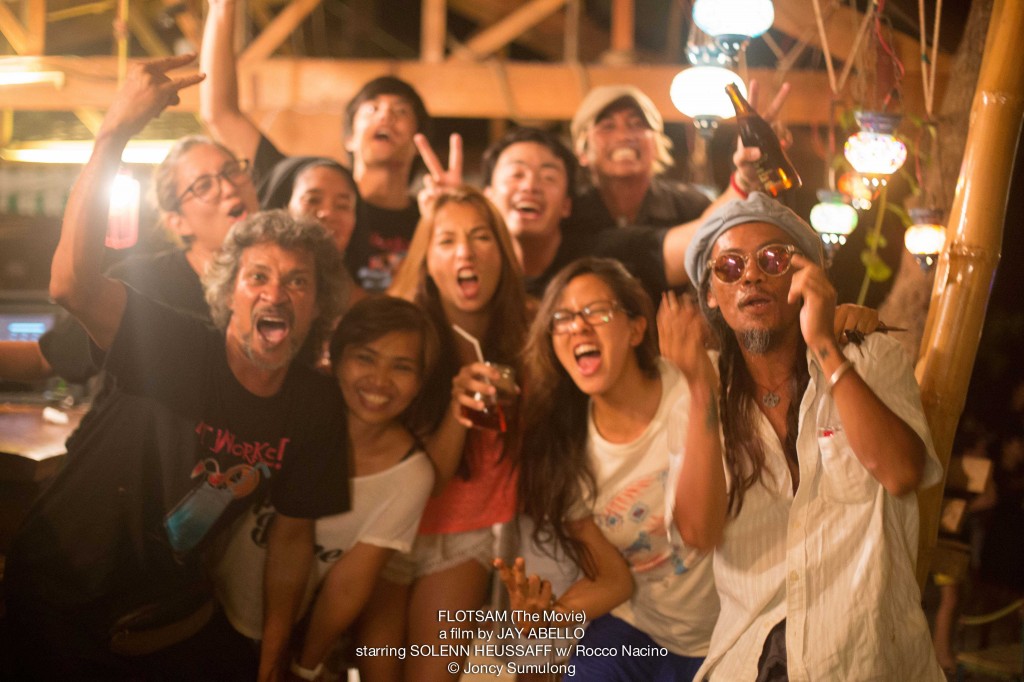 It was intense, it felt like everyone was running after time, it felt like we were sprinting for fun and it was also exactly what everyone needed on the 10th day, people were already sort of feeling the pressure and fatigue.  That was such a wild night, everyone was singing. Everyone. 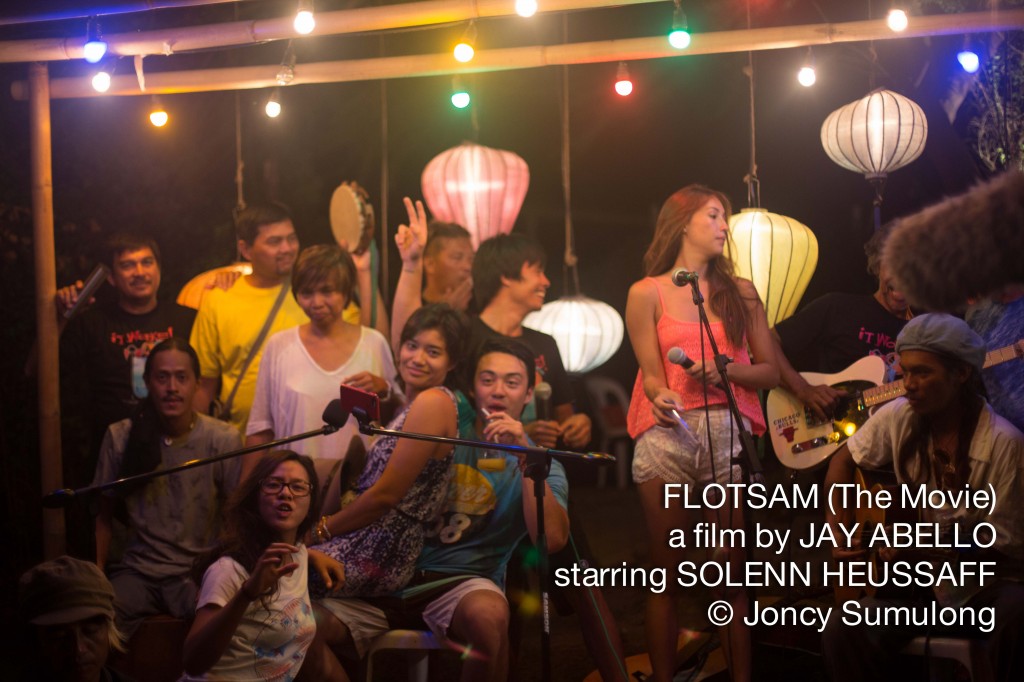 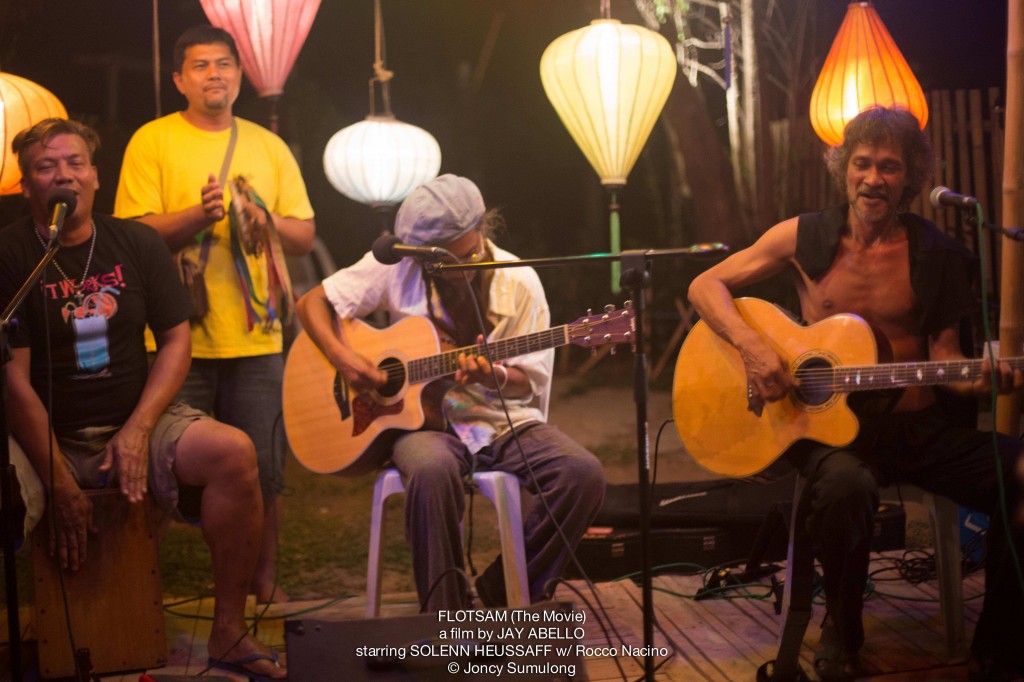 On the left is my gaffer Buboy. He was singing with Eraserheads’ Marcus Adoro and Bo Bismark. And he rocked it that night.

And just before midnight, we all sang Hey Jude and called it a night. Watch this!

Watch carefully by the middle of the song, Joncy who was shooting this passed the camera to me so he could join in, so we switched and this was live and the energy was so high I just accepted the camera and started framing and focusing but couldn’t get a focus and why? Because I didn’t have my glasses and as some of you might now know, I’m really not a snob when I don’t wave at you, I just can’t see. I have a 250/250 vision. So there I was summoning all my eye power and concentration to get the sharpest out of focus shot my limited vision could make sense of. Haha, like I said, it was crazy and intense fun!

My only real fear coming in the shoot was the intense summer heat.  I was scared it would cripple us because shoots are long hours, and we had lots of outdoor scenes and I remember distinctly worrying about Solenn and when we met before the shoot, I told her and she reassured me that she loved the heat, she loved the sun and that helped me relax a lot. Once again, I was wrong. And because we were shooting in the summer and beside the beach, everyone was dressed accordingly—bikinis, shorts, flip flops and a tan. 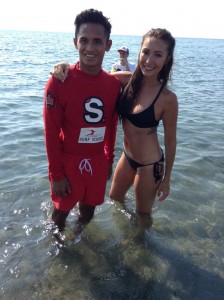 For those in production, having a pretty girl on the set is the best energy drink you can give the crew. In Flotsam, we had plenty, in bikinis. So we had the sharpest and most enthusiastic crew. The boys of CMB were all happy kids.

Speaking about CMB, I had worked with these boys since 11 years ago when I used to do floor directing for soap operas for GMA-7.  And the thing about soaps is the long hours and the show running for months per season.  I did 3 soaps, 2 of which ran a couple of seasons.  So the CMB and it’s boys have always been my go-to partner in shoots. If they could hack the long hours of tv soaps, film shoots would be a breeze. And so it was. 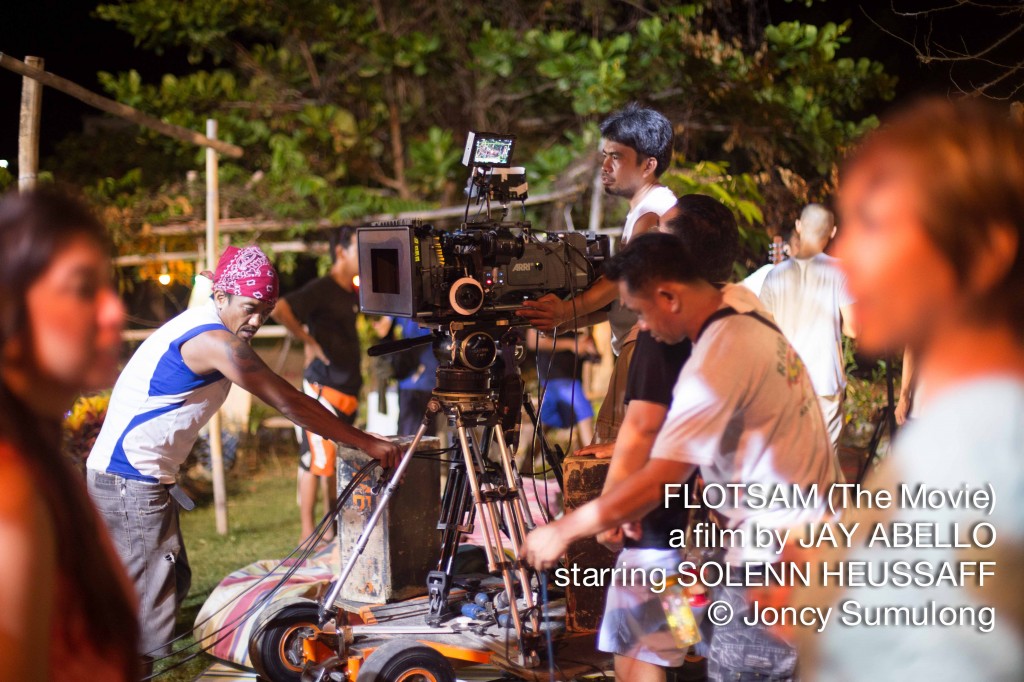 Flotsam is the first film I shot and directed myself.  It was one of those materials that I wanted to hold really close to my chest and be hands-on from writing to shooting all the way to the very end.  I wanted to hold the camera all the time, even all the handheld, even the water scenes, I wanted to shoot everything.  It was the only way I knew how. 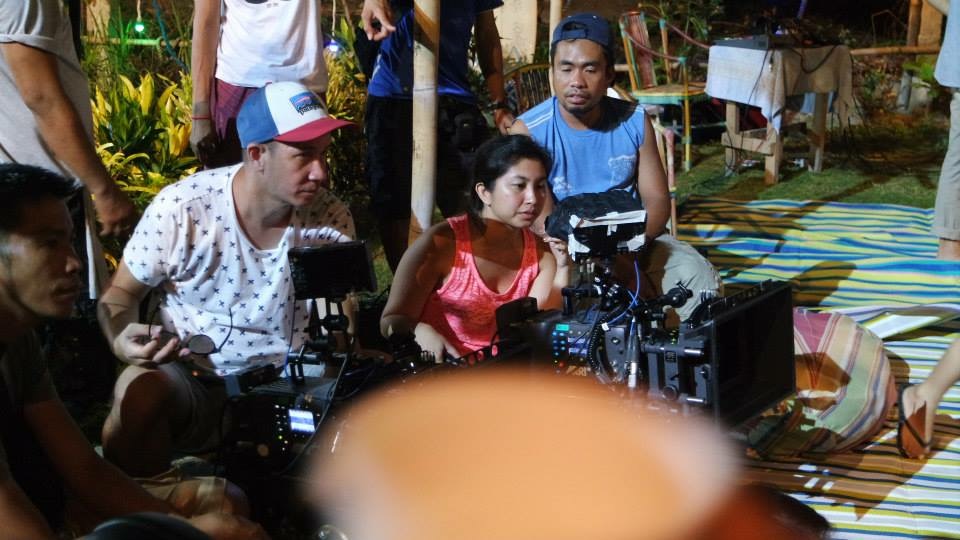 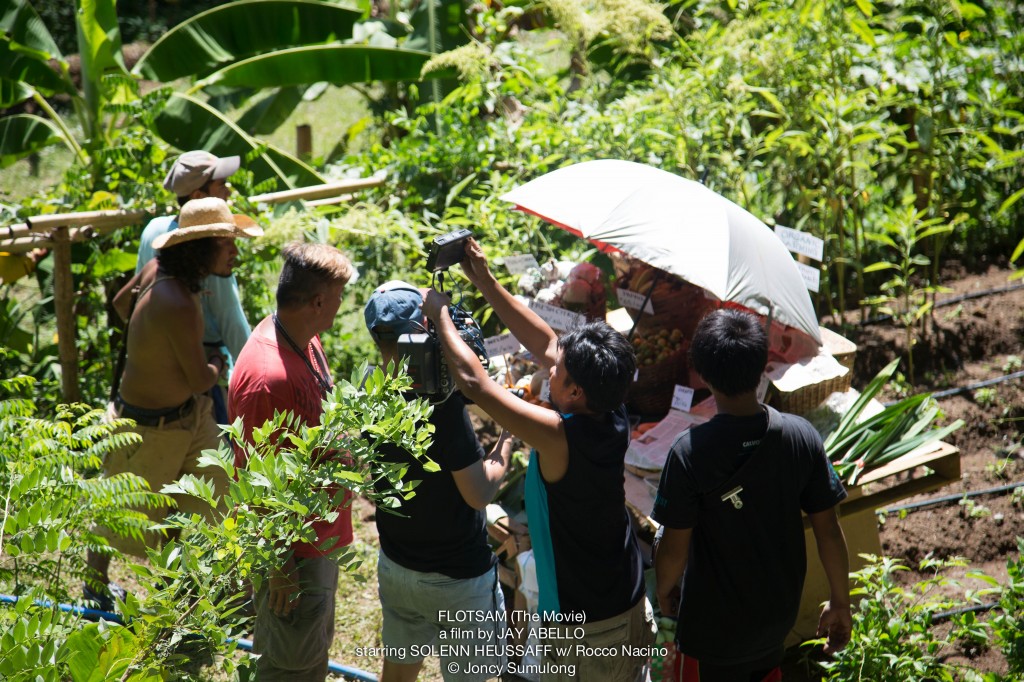 Mind you, we were an indie film. If you look at the photos, it felt like this was a big production. Maybe it was, but we were a small budgeted film. We wanted to do it that way. We stayed within P4.2M and we really did everything to stay within budget.  By the end of the shoot, we went back to shoot some pick-up shots and some surfing and we were back to shooting with DSLR’s and I was the driver and camera crew to myself.

Of-course, what makes the film look bigger than it really is is because of 2 things: 1.  CMB owner Mr Jim Baltazar’s belief in the project and  2.  We had a set.

One day I get a text from our producer that the owner of CMB,  Mr Jim Baltazar wanted to call and speak to me. So we spoke. He wanted to help us out. We ordered lights and a smaller camera based on our limited budget but he wanted us to use a bigger camera, one we couldn’t afford, and he didn’t want us to worry about it. The following day I paid him a visit and there were trying to humbly put together a film and here was Mr Jim telling us to focus our energies on doing a good film and not to worry about the equipment too much.  Then he brought us his camera department and brought out the big guns and made us choose which camera we wanted, it was for him, that simple. Another game-changer for us as we now went from being shot with small DSLR’s to the same camera used in Game of Thrones.  When we say that this film was built on a lot of heart, these moments are what we mean. 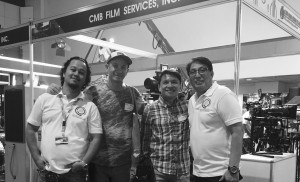 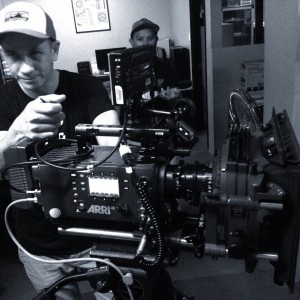 Every day I would wake up at 4am and be out in front of the beach by 5am and shoot early morning scenes. It somehow felt as if the camera was one important person on the set and I had to make sure we weren’t wasting its time. 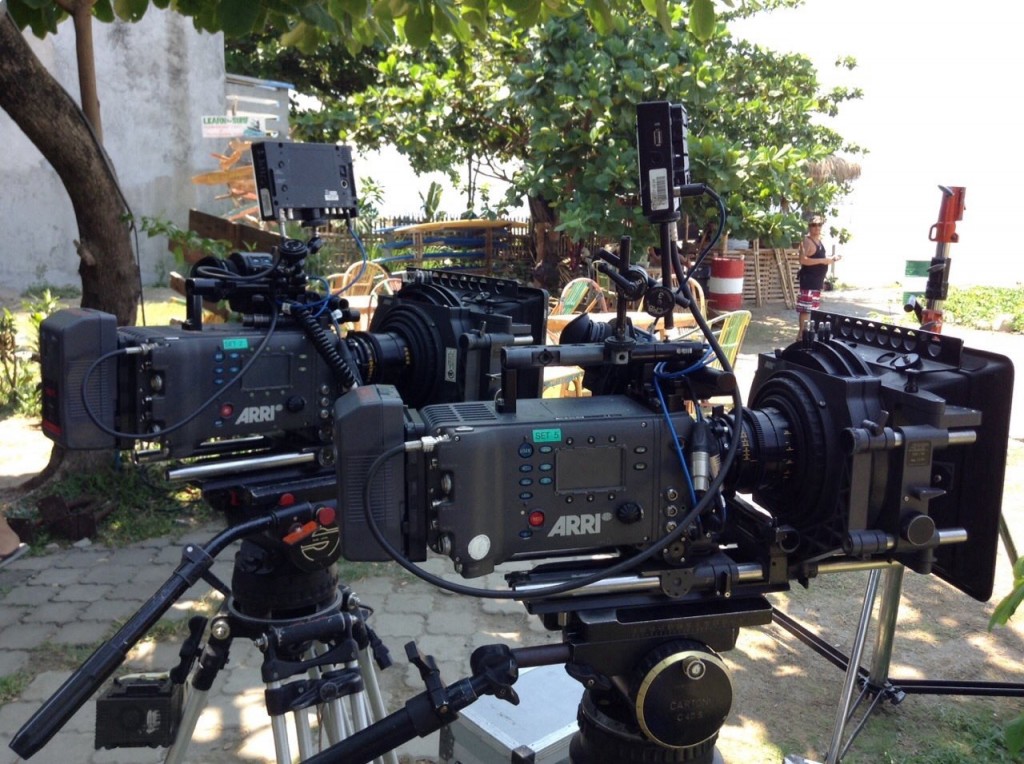 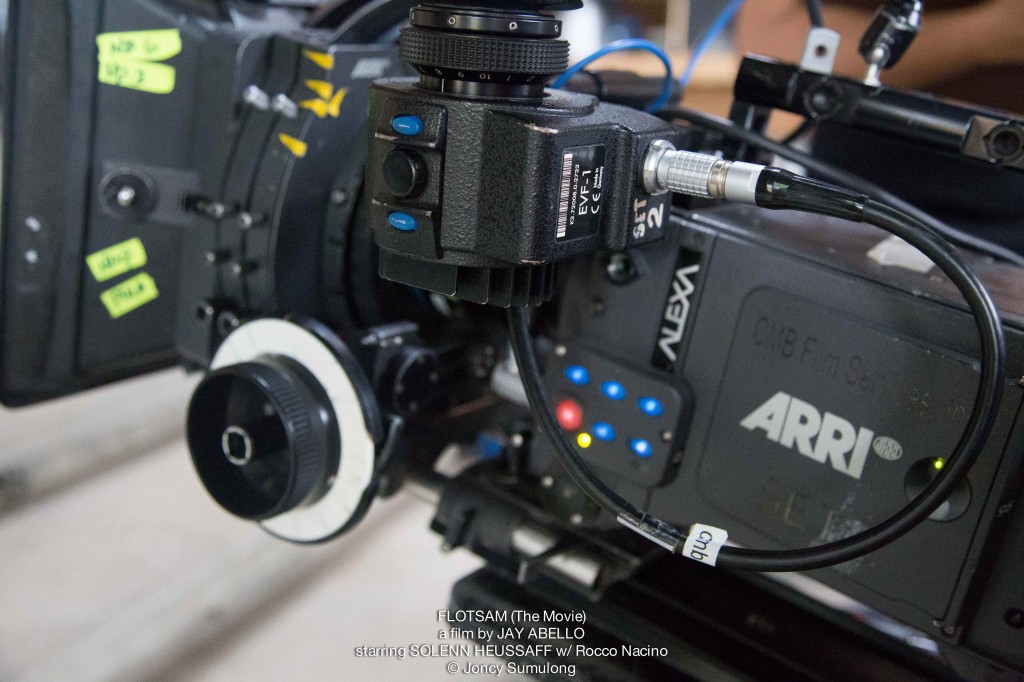 Another special circumstance I like sharing to people is the fact that Flotsam movie was set in the real Flotsam and Jetsam hostel.  Joncy, Mia and Carla basically built us a beautiful set over a year ago where it was easy enough to shoot at any angle you wanted to shoot from. It was almost like shooting in a studio set but with real trees and a real beach beside it. 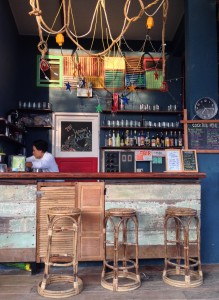 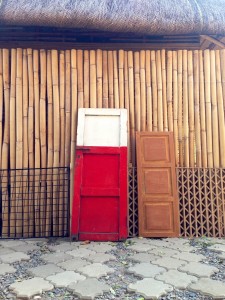