It all started on the last hours of December 7, 2014, when I drove back from La Union with Joncy and Carla Suiza.  In fairness to Carla, she was passed out almost the whole ride down so she’s not to blame for all this craziness.

It started with a question—who is the poster child of surfing?  Jericho. There’s no other. And not being a surfer, that wasn’t obvious to me but I guess it is—you go everywhere in the country and everyone would know Jericho, Joncy said, and he’s a bonafide surfer. So that’s it.

Next question followed after an ongoing series of discussions about film and cameras every time I went up to La Union to help a friend film his surf documentary.  Joncy and I had a very familiar background, as we’re both Ilonggo’s from Bacolod.  So communication was simple and no-nonsense.  We also shared the same bluntness to things, we din’t care about what people think, and we still don’t.  That and our fascination with film and cameras, we could talk for hours-on-end and sober.

Backtrack a little, I met Mia Sebastian on a surf trip with my then surf buddy Mylene Dizon on magic left in Pundaquit, Zambales.  Mylene was then a beginner as I am very much still one now. She’s moved on to become a much much advanced surfer whereas I remained an urfer and surf enthusiast.   Anyways, Mia mentioned that she was no her way to putting up a hostel in San Juan, La Union.  I have to admit, I never got the concept in my limited knowledge about hostels and La Union.

A little over a year after, I saw Flotsam on Facebook and I  came up shortly after. The first time I went, I think I spent 2 nights, 3 days and as soon as got back in Manila, I had written 3 scripts for 3 short films all about the place. One was about waiting for the wave. Another was about making pizza and the last was about making coffee.

And I had asked Joncy if I maybe they would allow me to film my shorts at Flotsam and Joncy hopped on the idea and showed me a script he had written as well, and we would talk about how we’d film it and on and on, our conversations went from purely hypothetical to serious casting and prep work, whichever script we’d be shooting and when, we just knew that we’d be filming at Flotsam.

Back to the drive. We were at TPLEX highway and it was around 11pm and the 2nd question was asked. How much does it cost to make an independent film? I gave a number. Joncy didn’t even flinch, he knew he wanted to do a film for many many years and this was just drive (literally).

It was my birthday by midnight but I dropped them off, and went home and that was that.  A few days later, Joncy and I had coffee and he said, lets do it. Can you write it? 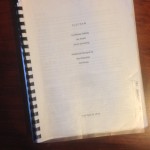 This is my copy of the shooting script after 12 days of principal photography.

At that time, I was trying to fix another script of mine and was in the middle of a million other things and a bit exhausted from my last film Red that I begged off and said, I know someone who can—Mickeygirl Galang. And Joncy knew her even better than me so I said, I’ll talk to her and see how it goes. Joncy insisted that I write it and my commitment was I’ll get on board as long as I don’t have to do it by myself.

I knew that the film would be about. It was always Flotsam. I always cited the film Mystic Pizza whenever I explained the film to Joncy. And he’d always refer to Before Sunrise because the place was as much the main character as the characters themselves. I always knew that that was the movie I wanted to make. Not a surf film and not on surfing but people in the surftown and what happens to them when they’re not surfing.

I wrote the characters, the plot, the first act and the relationships of the pairings of characters and Mickeygirl took it to town.

I met up with Mickeygirl in Bacolod December 26th.  She passed the first draft Jan 31, on the dot, right on the deadline, just as agreed, what a pro.

Although technically Flotsam was written between December and Febuary to March, the real force behind Flotsam goes back to many many years before these dates.  Joncy had always been a film nerd and deep down he’d always wanted to make films and he has been making his own films single-handedly.

In the industry, the most common names you’ll hear from directors when asked who they idolize, follow or got the most learning or influence from are Coppola, Tarantino, Wes Anderson, Scorcese, Tornatore, Spielberg Lynch, and Woody Allen.  I just wanted to do my Nottinghill. I followed Richard Curtis.

And so Flotsam is my ode to Richard Curtis and my first step to doing my Nottinghill.