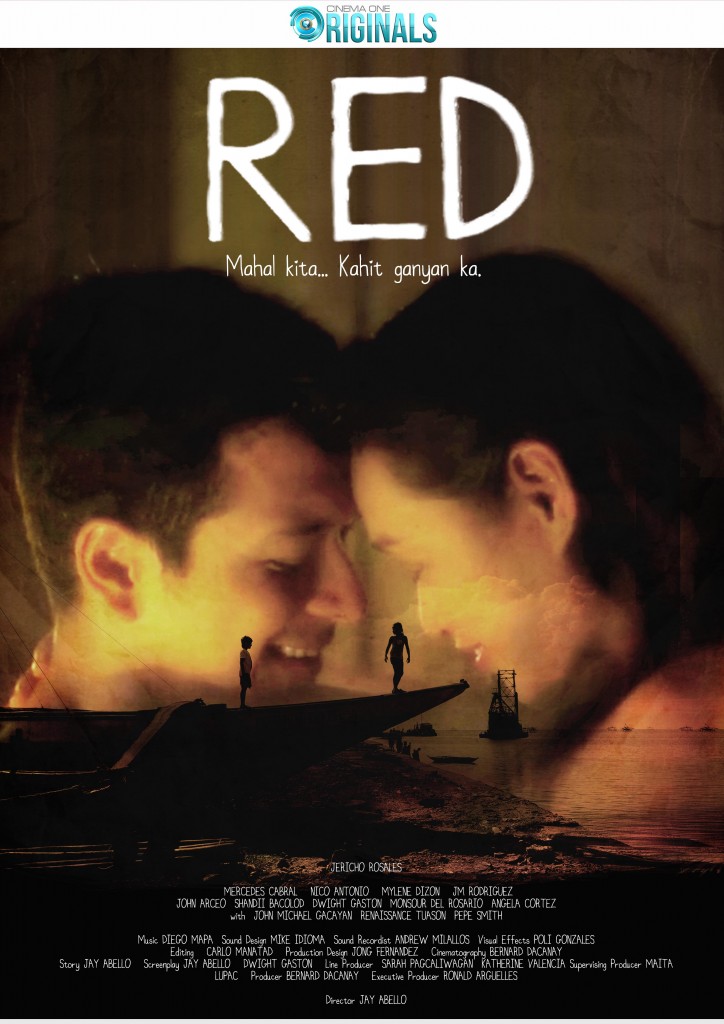 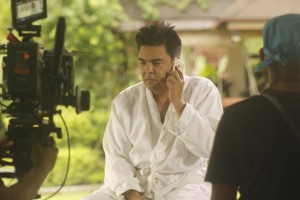 JM  Rodriguez plays ART.  Art is the other storyteller. He is simply put, the villain in the story. And JM played it even better than how the role was written on paper and how I imagined it. Needless to say that Art is someone to watch out for in this film. JM plays it so effortlessly, it’s unnerving.  You will love him and you will hate him in this film. Best casting choice we made hands-down.

I’ve known JM since we were kids.  We went to the same school in Bacolod, we were one batch apart I think. I was older. And I’ve always known him as a singer and super duper nice person.  Our mom’s were best of friends so were practically connected already.  So for me, it was really nice shooting Red with JM.  It’s always a pleasant break to talk in Ilonggo on the set and explain the scene and the character in your own dialect. I’ve lived in Manila more than half of my life but still, speaking in Ilonggo is liberating especially on the set. And when I would explain the film, JM gets it right away because he knows Bacolod, he knows Negros, he knows the people I reference characters from. 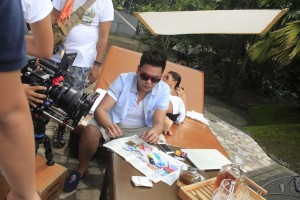 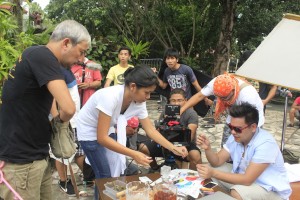 He only had 2 days of shoot but boy did we abuse the kindness of JM. He would get to the set at 6am and we would release him around 4am and he would be in good spirits the whole time. That to me is amazing.  What a pro!

We all loved JM…love, love, loved him!  Thank you for giving us Art.

It always fascinated me that in our country, much of history is told through great storytelling, and not through real hard core facts.  If we go back to the last 3 decades, the most significant parts of our history have been told by media, documentary filmmakers, writers and the best storytellers.  How many of us really know the story of the Marcos era?  Where did we base our version of the story?  Do we even remember where we heard it from?  The Ninoy Aquino assassination.  Nobody until now really knows the real story there.  I’ve always believed that unless you were there when something happened, you will never know the real story. In the end, the best storyteller wins and his version will stand and will stay on.  It becomes “HIS story”.

And we all love this process.  We are part of the approval of history.  We approve it based on our expert opinion—of what seems plausible to us.  Or what version did we like.  The relationship of the storyteller and the audience becomes symbiotic.  Storytellers are there because we want them to tell us stories, every day. We enjoy it. We approve it. And we encourage them.

Ever heard the saying “story is king?”   Yep. Guilty.  I love watching and listening to stories and good storytellers.  And I also love telling stories. 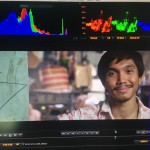 The whole story of Red would be told by a storyteller within the film. His name is Milton and we follow his story, his narrative.  And this made casting the storyteller one of the biggest and major decisions in the film. He was going to be our voice and an extension of the director, the actors and just the whole film… was going to be in his hands.

In the beginning, I chose Joel Torre.  He was the great Ilonggo actor.  I doubt there is any actor who hails from Negros bigger than him now.  The moment I got in Cinemaone, I called him and he turned it down due to health reasons.  I couldn’t find a replacement. And I think it wasn’t because there weren’t any good actors out there, because there are a lot.  I just couldn’t let go of Joel playing Milton in my head. So I could never cast someone in his age bracket. I was always looking for Joel so we sort of went round and round with casting Milton. 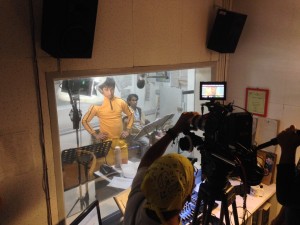 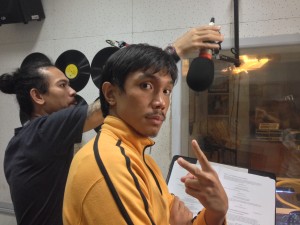 After a while, I decided wait a minute, maybe a younger actor would be interesting—more energy and vulnerability.  And I wanted one with comic timing.  There was this one actor that I’ve had on my mind for a while already.  I didn’t like him in his starring role, the first film I’d seen him on. I can’t get why but I just didn’t. So back then, I had brushed him off as an actor already.  And then I would see him in another film where he played a gay role, and another 2 or 3 short films and he was really really good that I said to myself, I want to work with this guy.

Long story short, he wasn’t our first choice, but Nico Antonio was the one I fought for the most.  Did he deliver the goods so-to-speak?  I’ll be biased saying that he did so you be the judge. 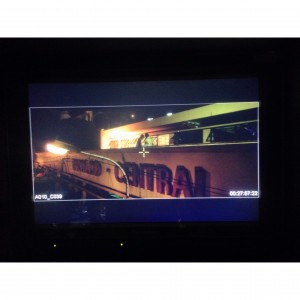 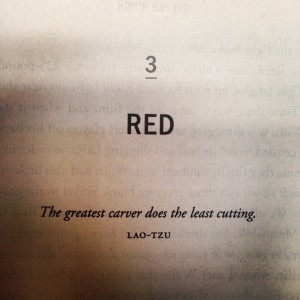 Red is not about the color as it is the past tense of the word read.  That is the only reason I stuck with the title even if so many other foreign films have used this title.  Red is about words.  Red is about how people read context of stories told to them and how they act according to what was told to them. That is my fascination with this story and why Red is written as such.

There are a lot of talking and words on this film.  Ha! Good luck viewers. 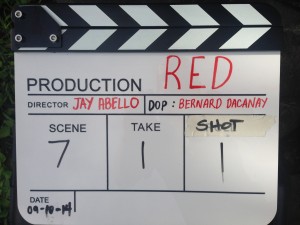 Is it based on a true story?  Yes and no.  A lot of the events in the film are based on real events that I’ve known growing up—some happened to my friends, some to people I know, some to myself.   They’re not all connected as in the film Red, that part is fiction.  But the characters are written based on real people I know.  Some of the names of people I’ve kept just as tribute to my friends, people who’s names I just found interesting enough to be on film.

How much of Red is real and how much is fiction?  Gossip is real.  If you find someone who’s never been a victim of gossip, they are the luckiest people on this planet. 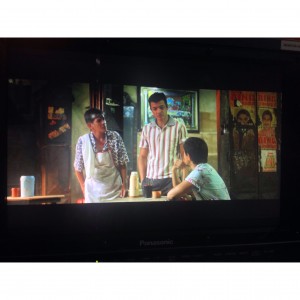 I’m certain you’re all saying to yourself, “oh no, another art film”. Well, we set out to do just the opposite.  This is not an art film, (no offense to art films).   We actually set the bar at entertaining people with this film.  And I sure hope we achieve it. 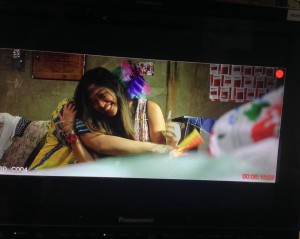 The character of Mai was tricky because it is such a small role (in terms of exposure) yet it has a really big impact in the main character and the movie.   It’s a love story but you almost never see them together.  It’s a very limiting but demanding role—sort of…create the biggest impact in just a few scenes. That was the role of Mai.  And Mercedes Cabral was a very easy choice to make.  They say that if you introduce someone in a lengthy fashion, it means they are nobody important.  Mercedes is someone who’s body of work spells it out for you.  I think we’re lucky to have her on board, period.    And she is such a trooper!

Oh, and one more thing—everyone talks about the power of Nora Aunor’s eyes.  I’ve never seen it in person.  But I’ve seen Mercedes’.  And I think I know what everyone means.